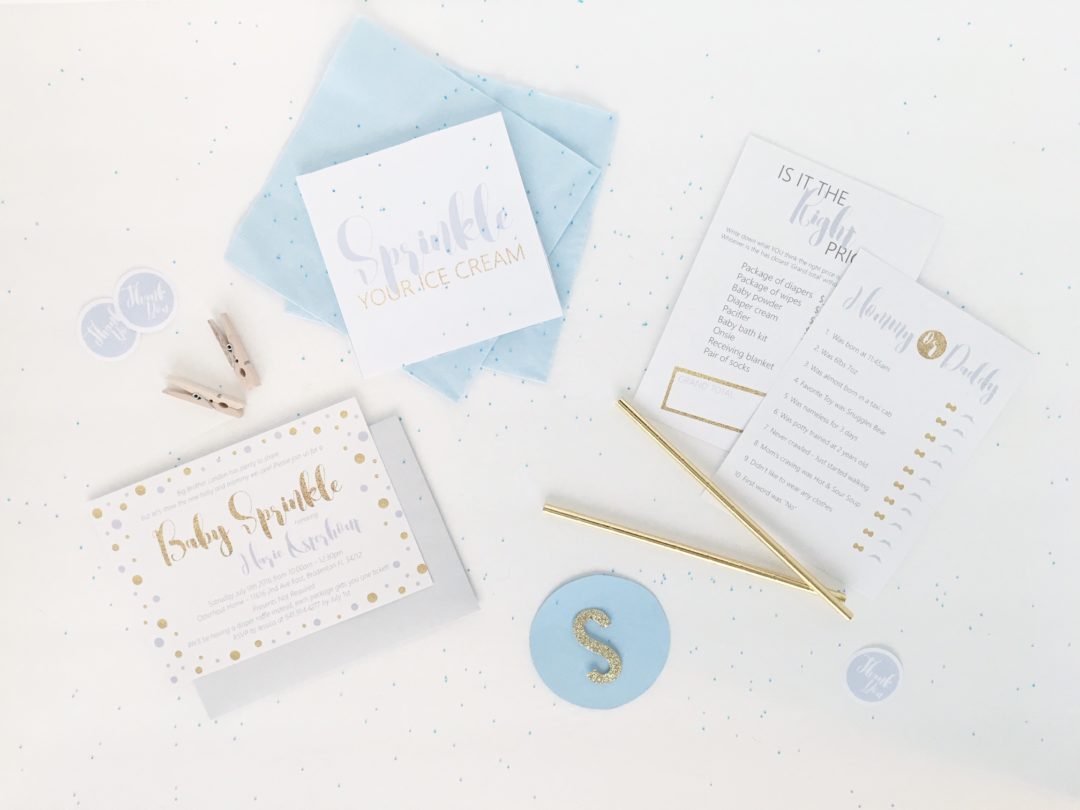 I had the privilege and the honor of co-hosting by very best friend, Marie’s, Baby Sprinkle with our other very best friend, Chelsea.  {you know that whole three musketeers thing …} Anyways, Marie is having her second baby boy, due in August, and we wanted to make sure that she felt just as special as she did with Landon {her first boy}

I have heard a lot of different opinions about Baby Sprinkles.  Should you have one if you are having the same sex baby again? Aren’t Baby Showers for your first baby only? Do Baby Sprinkles appear greedy? Why can’t we celebrate all children being born, not just the first one?

With all of these questions I’ve decided to start something called the Etiquette Series where I’ll research and answer these questions and many more like them to the best of my ability.  Or possibly just give you different perspectives to see these thoughts from.  For now though .. lets talk about the Baby Sprinkle that did happen!

I’ve noticed in everything that I have hosted for Marie {bridal shower, bachelorette party, baby shower} that she is less theme oriented and more COLOR oriented so we went with a White, Baby Blue and Gold look.  I started something new with this event, that I should have been doing all along, and made a tangible inspiration board {and of course a Collaborative Pinterest Board}.  I learned this from Lauren Conrad in her book Celebrate.  Having something with me to hold and pull out when I was shopping made life a lot easier and I was able to keep notes about what I had purchased and what I still needed on the back.

After we had settled on a color and had all the inspiration we could handle .. What came next? 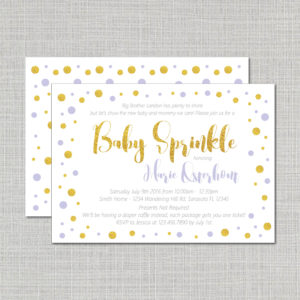 Which, by the way, is now available in the Etsy Shop.

A few notes on the invitation:

We made the time from 10 – 12:30 for a few reasons.  1. We wanted everyone to still have time in their day for other things.  Being that it was a Sprinkle it was smaller and quicker than a full on Baby Shower.  2. This also allowed us to serve a few appetizers rather than an entire spread.

We also explained on the invitation that Gifts Not Required.  As this is Marie’s second child and second boy she felt that she really didn’t NEED anything.  Instead we hosted a diaper raffle, because she could always use diapers!

Since we were only doing a few appetizers we decided to divide and conquer.  We made Hummus Bites, Veggie Pizza, Tomato Motz Sticks, and purchased some small sandwiches.  We also had, Lemon Mint Water, Lemonade, and the MOST AMAZING COFFEE PUNCH you’ve ever had.  Simple and easy to eat.

We also had an Ice Cream bar in between games as a treat.  Why? Because you can SPRINKLE your ice cream with all the fun and different SPRINKLES!!

With every shower we’ve hosted for each other, we’ve had the rule that each person {hosting} comes up with their own game, hosts it during the shower, and supplies the prize for it.  Of course I always help in making sure that if the game requires a card to write on that it is cute and matches the theme. Call me a control freak!

My game was Mommy or Daddy and Chelsea did Is The Price Right? Both were successful and both produced a lot of laughs. 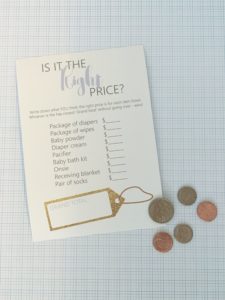 We also like to have an activity for people to do as everyone is arriving that could also be a keepsake for Marie and the baby.  This shower we did one of my favorite – Custom Blocks. 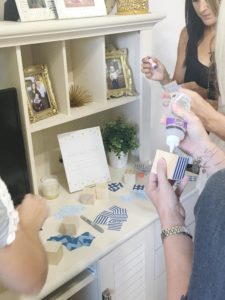 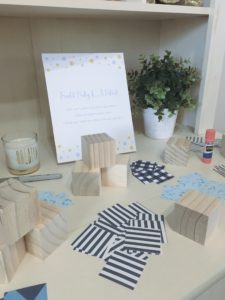 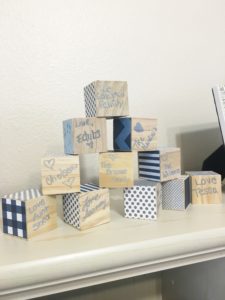 My favorite part of course! Of course everything that I could, I made a blue, white and gold sign for – all using the same fonts as the invite so it all went together {its the designer geek in me}.  We had a “picture wall” because everyone wants to take pictures with the Mommy-To-Be why not have a place to make them cute?!  The baby sock garland was not only darling but useful as Marie gets to keep that decoration.  Of course any excuse to pull out my blue and white serving dishes – you don’t have to ask me twice.

*Note: It makes a BIG difference, in my opinion, when your serving dishes match the theme.  If you don’t want to invest in this just make sure that White is part of your theme … most people own white serving dishes. 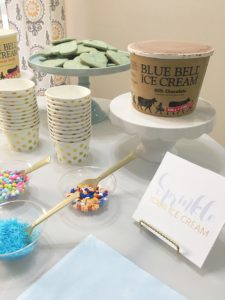 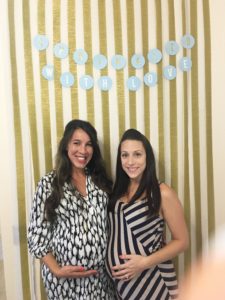 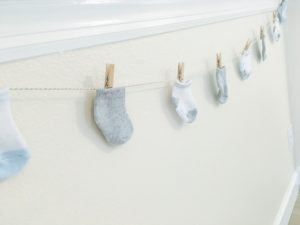 Lastly we sent the guests home with a cute little succulent plant.  I don’t know about anyone else but favors from parties can either be hit or miss.  Sometimes they are great and you actually use or enjoy them and sometimes they sit on your kitchen counter for a week before you throw them away.  With every shower I host I like to make sure the favor is useful or at lease nice to look at.  We opted with little succulent plants.

Over all it was a great success and Marie was very happy with the outcome!